The collapse of Oil Prices

The collapse of Oil Prices

Nowadays we are witnessing an “abundance oil” era. It seems that cheap oil is here to stay. This is happening within an economic slowdown context, mainly in emerging countries. Downward revisions by major institutions are constantly being updated, the World Bank has corrected the global growth forecast to 2.9%, from 3.3% predicted in June.

Currently, energy commodities are within an excess capacity scenario, as a direct result of years of low interest rates and expansive monetary policy carried out by central banks, and this is reflected in the price levels. Oil is no an exception. Having made significant investments in infrastructure, competition arrives and in a pro-cyclical sector such as energy markets, when costs go down, prices go down as well, and more efficient producers remain on the market.

In this article we will explain the main reasons of the oil downward trend.

A barrel of Brent, the European benchmark, is now worth about 70% less than the value reached in mid-2014, when trading was above 114$/bbl. In 2015, price slumped by 34%, and today oil is traded below 28 $/bbl. In this year, oil price have reached minimum of twelve years mainly due to the slowdown of China’s economy and Iran’s return to the market. 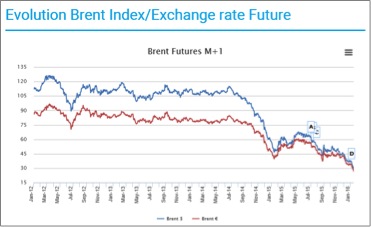 However, it should be noted that, the evolution of futures market is discounting some increases for the coming years. Nevertheless the predicted values are far from the prices observed in forward curves from previous periods.

The general opinion of investment agencies is clear and unanimous: the price of oil could remain in intervals of low prices, compared to those seen in previous years, for a long period of time. For this year, according to forecasts, it is not expected to exceed 60 $/bbl average. Even in the last days we have observed forecast of 20 $/bbl by several analysts, due to a possible devaluation of the Yuan.

It is complex and imprecise making a long-term prices forecasting, and especially in a volatile market such as oil. The most important is to know the market trend. And the trend is negative, as a direct result of the combination of supply and demand.

On the one hand, we witness an oversupply due mainly to two factors:

– First, the impact of shale oil through the production technique of fracking in the US with investments carried out when oil traded at over 100 $/bbl. This fact has led US go from being the world’s largest importer of oil to become one of the leading exporters.

– Secondly, OPEC’s refusal to reduce production levels, led by Saudi Arabia decision in order to defend its market share. Production by OPEC countries has reached 31.5 mb overcome in the third quarter of 2015.

On the other hand, demand outlook is weak. Currently, the slowdown and paradigm shift in Chinese economy model (second largest consumer of oil) to domestic consumption and towards service sector, and prospects of replacing oil as fuel in the transport sector, will make demand goes down. In this regard, the International Energy Agency (IEA) has already announced that “consumption of oil has reached a maximum in the third quarter of 2015 and growth in demand will slow (…)”. So, according to IEA analysis, global demand will continue to grow in 2016 but at a slower pace, up 1.2% over the 1.8% growth reached in previous year.

Nowadays, we have a wider and more varied supply of oil.

The current excess of supply, which is around 2 million barrels per day according to the IEA, can be higher in the coming months taking into account Iran’s comeback to the markets, after the lifting of international sanctions on its nuclear program. It is expected to see 500,000 additional barrels on the market as a first stage and another 500,000 barrels in a second phase. It should also be noted that an important part of this offer will be targeted primarily to the Asian market, a market traditionally dominated by Saudi Arabia.

Furthermore, today we have a more diversified sources of oil supply. One of the consequences left by the last meeting of the member countries of OPEC, on December 4th, was the abandonment of acting as a cartel to set the price. For the first time, the market is not only following OPEC movements. Prices are no longer determined exclusively by this group of countries.

Fracking revolution has involved not only greater supply capacity, but lower dependence of consumers towards the Middle East. As can be seen for months, geopolitical conflicts in the region have lost influence on oil prices. In recent months we have witnessed political instability in Syria, Yemen, Venezuela, sanctions against Russia, conflicts between countries in the Middle East and the recent “war” between Iran and Saudi Arabia, terrorist attacks, etc., however, oil price has continued to decline. Thus, disputes between countries in the region are no longer bullish factors, the market today look to oversupply and, in that sense, the conflicts in the Middle East are less likely to involve major OPEC members can get an agreement on supply reduction.

While it is true that today the main factor influencing oil prices is the behavior of supply, it is important taking into account trends in demand. At the end of the day, prices and their evolution are set under the laws of both curves.

Thus, current low oil prices levels are not only due to oversupply, but a slowdown demand. While it is true that today’s oil consumption is at record highs (95 million barrels), the prospect of growth in demand is bearish, as mentioned before. This fact is also taken into account by the market and is one of the reasons prices may continue at low levels. In addition to the slowdown in oil-consuming countries, such as China’s case mentioned above, today’s energy model refers to a more efficient and sustainable growth. The present and future of the energy sector will be developed within a framework of sustainability. An indication of that are the points of agreement among the countries attending the climate summit in Paris (COP21), held at the end of last year. Replacing more polluting technologies power generation by more environmentally friendly, represents a priority of a model for free emissions growth that can enforce the goal of keeping the global temperature increase below 2 ° C for this century. Furthermore, countries like China and the US (the most polluting in the world) have changed their attitude towards environmental policies and programs taking important steps in reducing emissions.

In addition, the outlook of oil demand is weak due to the possibility for this fuel to be replaced by other sources. Currently, oil and its derivatives are primarily used as fuel for transport sector. In this role, oil has been 40 years without any competition in the market. Improvements in efficiency (which causes that primary energy demand does not increase despite economic growth) and technology will change this dynamic and will create competition.

Therefore, oil will face real competition in the transport sector, these new agents could be electric vehicles, natural gas vehicles or those that run on biodiesel, examples that currently are non-significant in the market but this will rapidly change, and it will have a significant impact on pricing. We should bear in mind that during the 1973’s oil crisis, oil was replaced by cheaper technologies such as natural gas, coal and nuclear to develop industrial production and power generation. We will see what will occur in transport sector. Clearly, the evolution of transport with alternative fuels will progress according to geographical regions. For example, the higher price of natural gas in Europe compared to the US (almost double) will prevent development at the same rate.

Thus, what we expect for oil prices? As mentioned before, the most important is to know the trend of supply and demand, which shows no signs of change. Can we see prices around 20$/bbl in the coming months? Or prices around the 50$-60$/bbl? both scenarios are possible. However, as mentioned throughout this article, both oversupply and weak demand will continue to be the main characters for a certain period of time. The oversupply will maintain the upward trend due to new market participants and the battle to gain market share, while demand will remain weak as a result of the slowdown in emerging countries and energy efficiency, which represent a main role in developed countries. Today 40% less primary energy is demand to produce one unit of GDP.

The oil-producing countries will have to adapt to the new environment of lower prices and compete for market share, this fact will bring economic efficiency and benefit to last resort consumers.