The American breakthrough in the fight against climate change

The American breakthrough in the fight against climate change

The efforts carried out to dethrone King Coal from its role of primary source in the production of electricity seem endless at every latitude.

The determination shown by countries around the world in fighting climate change bodes well.

Only last May, Norway announced its sovereign wealth fund, was about to accelerate the end of coal by imposing from the 1st of January 2016  the exit from every company getting 30% of its turnover or energy  from  coal.

Almost simultaneously, at the meeting of the Oil and Gas Climate Initiative, some of the largest oil companies in the world, including Eni, Shell, BP, Total, Saudi Aramco, Pemex and Sinopec, responsible for one-sixth of the world’s oil and gas production, published a report listing all the possible strategies to be implemented in order to improve the management of carbon emissions.

It finally seems to be also the turn of the United States, always standing at the very last row in the fight against climate change, now the country seems to take the field with a new plan to protect the environment.

President Obama has finally lifted the curtain on the final version of its Clean Power Plan, describing in detail, measures and developments.

The Obama administration, at the beginning of its mandate, promised a reduction of 26-28% in the emission of greenhouse gases by 2025 compared to 2005’s. 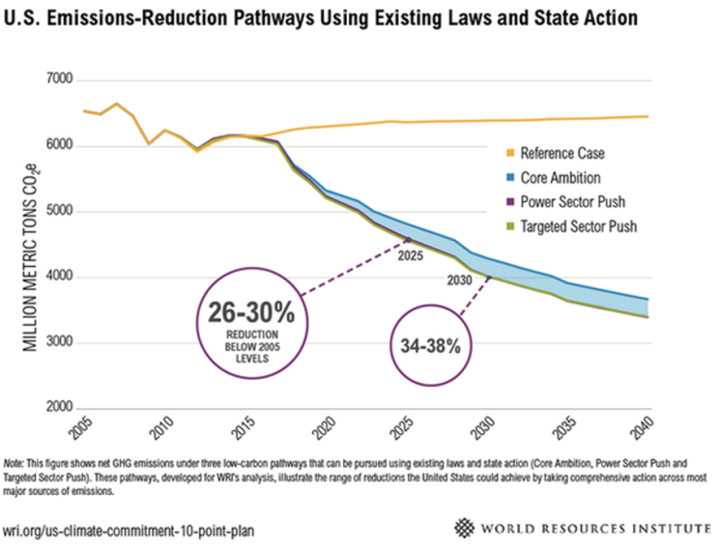 Until 2013 these emissions fell by only 8.5% compared to 2005, and much of this fall was due to external factors such as:

Nonetheless, emissions have recently begun creeping upward again. The Obama administration has proposed through the EPA (Environmental Protection Agency) a new set of rules, ranging from fuel economy-standards for cars and trucks, to strict carbon dioxide limits for anyone who wants to implement new power plants.

Under the Clean Power Plan, every US state will get a specific goal for reducing carbon dioxide emissions, while state policymakers can draft their own plans for how to get there, choosing according to their energy profile, among the closure of coal power stations in favor of gas power stations, through the promotion and development of power generation from renewable and nuclear sources, substantial improvements in energy efficiency or by pricing carbon using the cap-and-trade system. The final regulation will take effect in August 2015, and states have until June 2016 to draw up their plans for reducing emissions.

About the limits proposed by EPA on carbon dioxide emissions coming from coal and natural gas power plants, the first major step dates back to 2013, when the EPA fixed the emission cap at about 1100 pounds (about 500 kg) per MW/h. Considering that the average coal plant in the USA currently produces about 1768 pounds of carbon dioxide per MW/h, it is easy to understand the entity of the deal. To summarize it would be possible for utilities to build new thermal power plants only if they were able to catch 20 to 40 % of the carbon produced and store it underground.

The legislation itself, does not suppose a great change in the status quo. This is because utilities have stopped building coal plants a long time ago, since natural gas is currently a more efficient solution. In fact coal prices, already experiencing a collapse, were not affected by any major change after the adoption of this normative, which does nothing but consolidate the current situation. But it is not to forget its “preventive function”: in fact if gas would become unexpectedly expensive, this rule would make quite complex for utilities to turn to coal for energy supply.

In support of the Clean Power Plan, the White House has provided also a range of complementary policies. The USA agreed to work with the Chinese government and other countries to phase out hydrofluorocarbons, another set of greenhouse gases used basically everywhere, from soda machines to car air conditioners. The Interior Department is trying to accelerate the development of wind and photovoltaic power plants on publicly owned land. In addition foreign-aid agencies have stopped financing coal plants overseas.

But are we sure that the new US strategy to fight against climate change will be enough to stop the spread of coal in the world? The tangible risk is that the collapse of coal prices, (that have long poured in dramatic conditions because of the heavy competition from natural gas, and the slowdown of China’s economy, the first consumer of this commodity) will induce developing countries to increase its purchase and use.

Thermal coal has been traded to its lowest for the past 10 years in Europe, at just over € 55 per ton, while in 2008 the price was around € 200 per ton. Coal mines often fail to cover costs. In the US in the past three years approximately 30 companies operating in the coal sector went into receivership. Even developing countries seem unable to elude this trend. Indonesia, the world’s leading exporter of thermal coal, had to reduce production because of low prices, while in China, imports and domestic production fell drastically last year, after the Chinese Government started its war against pollution.

In the best scenario developing countries, will learn from the mistakes of its predecessors (see China) and will join the fight against global warming. The first stop will be held in Paris next December, where members of the United Nations will meet to discuss a global climate agreement on curbing emissions and avoiding 2°C of global warming.